Hi,
last time I talked about some stuff like dark matter (1 & 2), dark energy and I did not explain a lot of things which I mentioned and this time I will talk about Standard Model.

The next picture shows how it looks like, you could say that it is the “modern” periodic table or some kind of holy grail of physics. 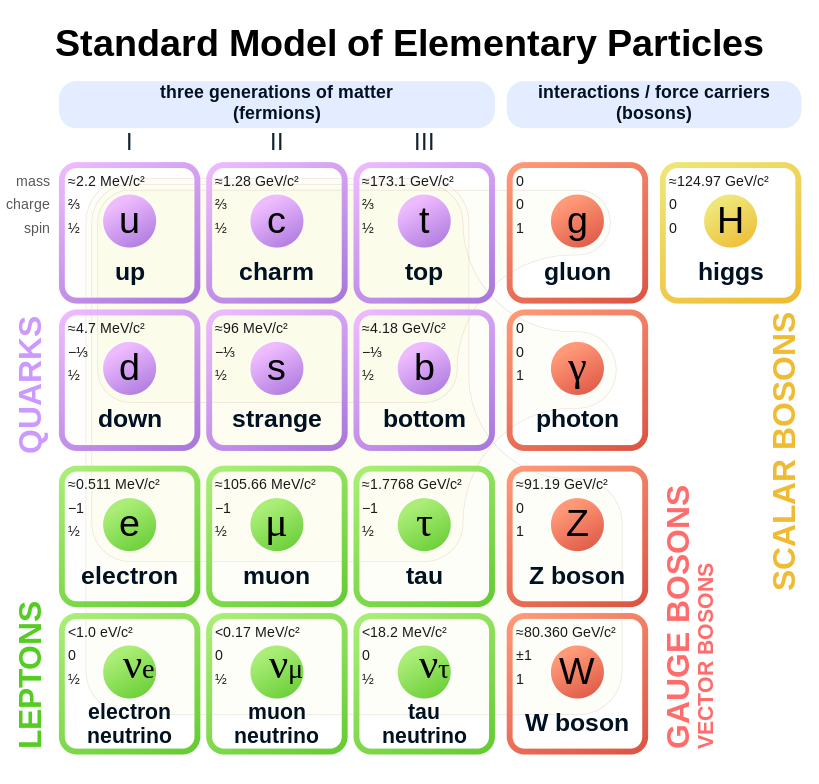 So in this standard model you have particles that make up everything we know [1].

There are four main groups which are sorted by the forces they interact with.

All of those particles interact with gravity. Quarks also interact through strong nuclear force while leptons do not interact that way, also all of them have whole numbers for charge.

The red part has inside particles which are what is called “force carriers” they carry the fundamental forces with graviton excluded because he is not proven yet.

The most mysterious is the yellow part with only Higgs boson inside, I will make sure to make a whole chapter only about it.

Already months and months ago I made post about quarks. Here I will cut it short so, quarks are particles that made everything there is except just a little part which is made from electrons. Quarks normally group together into hadrons – protons, neutrons, pions. Quarks have charge of either +2/3 or -1/3. They also have a property called color which is not color at all and they must group together so their colors cancel into white (white) [2].

There are three main particles called: electrons, muons and tauons. Only electrons are actually somewhere while we can create other in the particle accelerator.

All of those have -1 charge but there are other particles called neutrinos. Electrons, muons and tauons all have their neutrino.

I already wrote about neutrinos but they are actually extremely light particles sometimes called “ghost” particles because they can easily go through whole planet Earth without touching anything. They are also electrically neutral.

Most of those particles have mass and that is because of Higgs boson, but that is whole new story which I will have to start with symmetries and fields, stay tuned.

Also main difference between force carriers and everything else is that they do not need any space to exist, there can be millions of them at one spot while only one lepton or quark.

[1] I do not talk about dark matter which I mentioned in earlier posts. WIMPs are not here since they do not belong into standard model, those are particles beyond the model even if they exist.

[2] Quarks have 3 basic colors: Red, Green and Blue but there are of course anti quarks which have just opposite colors: Antired, Antigreen and antiblue.