Hi,
it has been couple of posts since I last wrote about moons ofour solar system. Today I will write about the last Galilean moon: Io. 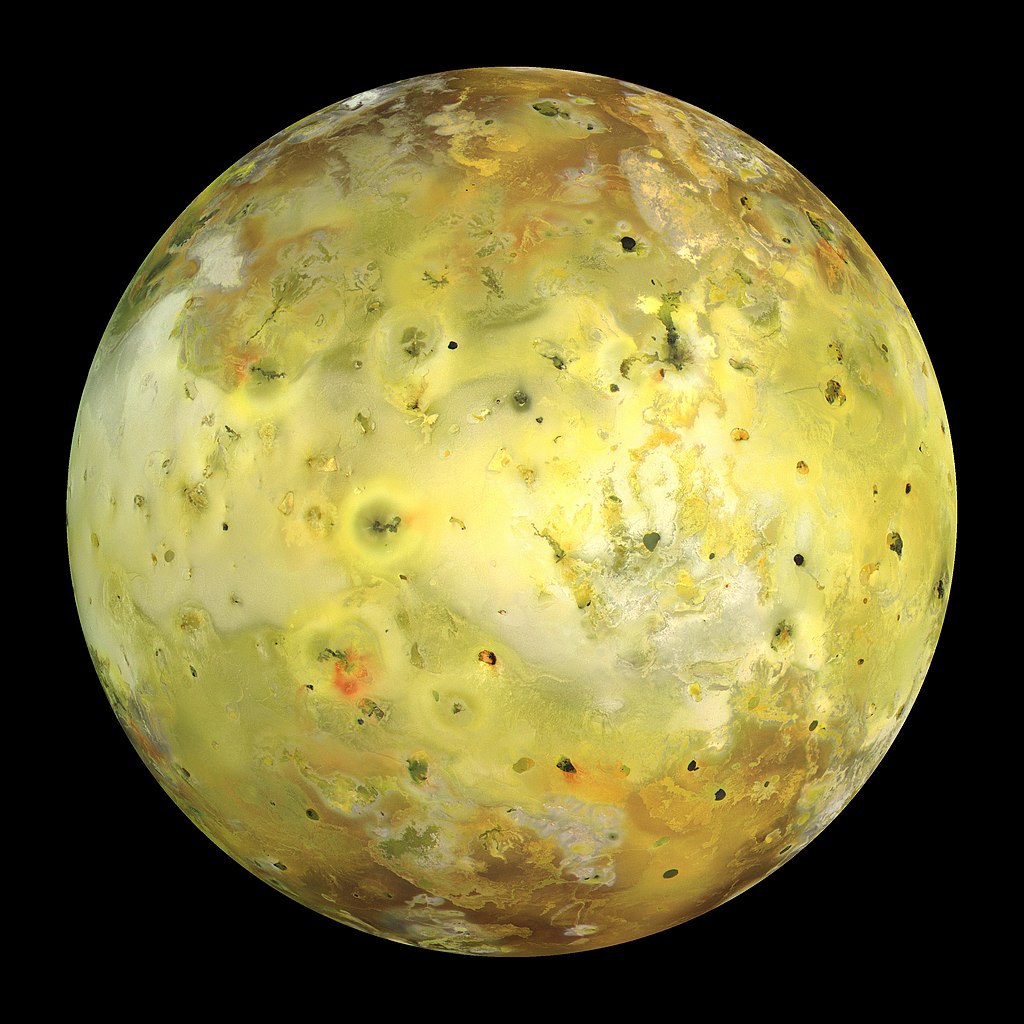 Io is kind of hellish world. With extreme temperatures and extremely poisonous chemicals, everywhere. Still it has suprisingly beautiful colors and this piece of strange rock is very important component in Jupiter‘s system, lets see why.

Io was with the rest of Galilean moons found out first by Galileo and Simon Marius who gave her the name: Io which was pristess of Hera. She was also Zeus’s lover as it happens frequently.

The picture which is above is taken in true colors and there is yellow red and brown because of certain element. You probably remember this one: sulfur.

There are also various kinds of silicates, this is stuff that contains silicon. Otherwise sulfur dioxide and all other various compounds.

What really suprised scientist when they saw the surface for the first time was that there were and are not many craters. They wanted to date how old the moon is but it surpised them what they found. The surface is in this feature similar to Earth. There are almost no craters because of its geologic activity (othewise rare) which transforms the top layers all the time.

There are more than 400 active volcanoes. Io, is the most geologicly active thing in whole
known Solar System.

There are roughly 150 mountains on the surface ranging to even higher heights than Mount Everest. There are not very steep because there is a huge erosion causing stuff to smooth out. Those mountains were created by the push of the litosphere going down while some parts went up. There are also special features called paterae. They are similar to what on Earth we call caldera which forms as you can see on the right.

This particular picture shows the formation of Crater Lake in state of Oregon, I have been there and I must say that it is something extremely beatiful!

Otherwise the surface is cold, about -143°C but there are some areas around volcanoes which are heated up to even 17°C.

For a long time humans just saw Io as a point in the sky with magnitude of 5. It took the first probes to actually observe something about it except roughly the color.

Pioneer 10 and 11 launched in 1972 and 1973 respectively were the first probes to collect some data.

After that famous Voyager 1 and 2 did another flyby collecting even more data followed up by Galileo and New Horizons.

The orbit of Io is in resonance with Ganymede and Europa as I already mentioned before. This creates tidal heating through friction causing all this geological activity. Io orbits as fifth moon from Jupiter but it is the closest one of the Galilean moons. This means roughly 421,700 kilometers and one orbit takes 42.5 hours, the moon itself does not rotate because it is tidaly locked to Jupiter.

Io is just a little bigger than Moon, by about 5% which means diameter 3642,6 kilometers but far greater mass (+20%). Io is very dense moon.

There is even atmosphere but it has the pressure of about one billionth of our atmosphere. It is mostly composed of oxide disulfide. If some probe would land there it would not be able to use parachute and it would not need heat shield to prevent from burning. To slow down, it would have to use its rocket nozzles.

What is really interesting is that it interacts with Jupiters magnetosphere which takes out about one ton of material from Io. Io also works as giant generator creating electric field which would kill human in matter of minutes with the power of 400,000 volts and 3,000,000 ampers.

One thought on “Moons of our Solar System: Io”