Hi,
so this monday we had chemistry class again and because we are learning about halogens our teacher mentioned some acids and she explained why some of them are stronger than other. She got to the point of comparing HClO4, HClO3, HClO2 and HClO. She arranged them in this order in decreasing acidicity explaining why. As I found out over time, she is oversimplifying things, in this post I will try to show why they are in this order. 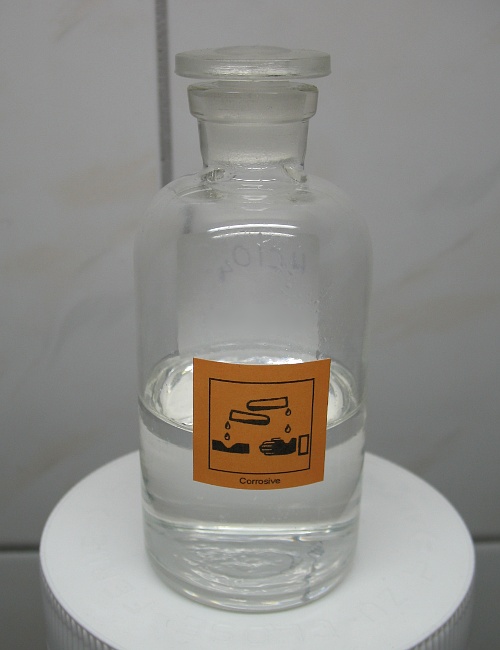 Almost like water, the picture of perchloric acid. (HClO4)

So here we have four acids (to make it faster I will compare only first and last one). Both are same except that there are three more oxygens in HClO4 and the oxidation number of Cl is VII on the left and I on the right. Now this has to be the reason for different properties.

In all of those molecules Cl is the middle one, which means that all oxygens are connected to it with double bond, except one with only simple one which has hydrogen on the other side.

The picture shows the structure of these molecules.

So as you probably know water has what is called “dipole moment”. This is a term that is used for molecules that have partiall charge on one side and the other charge on the other side.

This has very interesting properties but what is important is that HClO4 has this too, and much more than HClO because there are oxygen ions which have charge of -II making chlorine in the middle of them a lot “ripped off” because there are those oxygens with higher electronegativity that are trying to get those electrons to get on the configuration of noble gases.

Now before the conclusion we must clear out the definition of acidic molecule. Such a molecule is acid when it is good at giving H+, so now the question is, why is HClO4 better in giving H+ than HClO?

So the key lies in what happens when these acids break up. When HClO4 becomes ClO4- there is not so much stress into getting the hydrogen back because delocalized electrons from the other oxygens [1] can ease it up making the molecule more stable while in HClO loses only one of two donors of oxygen making the molecule want it back a LOT.

If you are not sure about this, ask me in the comments or check out the resources that I used.

[1] Yes oxygens here have all two free electron pairs which are doing some wonders!

9 thoughts on “Why is HClO4 stronger than HClO?”