Hi,
today I will write about one particular physics problem that I was solving during weekend. It was pretty hard, but quite interesting set-up. (It is originally from Czech physics seminar called Fykos)

You and your boyfriend/girlfriend are sitting on a beach watching sunset. Luckily you are prepared to extend the romantic moment with elevator that will drive upwards. How fast does it need to drive for you two to be able to watch sunset continously?

Normally sunset related problems are about plane or car driving and how fast does it need to be for you to watch sunset all the time. That is freakin’ easy because you just need to drive at the speed that the Earth turns in your place. For Prague this is roughly 300m/s which is about the speed of sound.

This problem is way more unique. I do not know if my solution is correct since the people from seminar did not release solutions yet.

Basically you are standing on top of circle that is rotating at 300 m/s or also 0.00417°/s. You are soon leaving place from which you could see the sunset so you need to go up. The problem is that you are not actually going directly upwards to this place but as Earth turns your elevator rises in a line perpendicular to tangent of Earth at your paricular location, check out this desmos graph which helped me a lot to understand it (my creation): https://www.desmos.com/calculator/oftnm48s3b

Here is a picture though it is better to go on the original link which is very interactive: 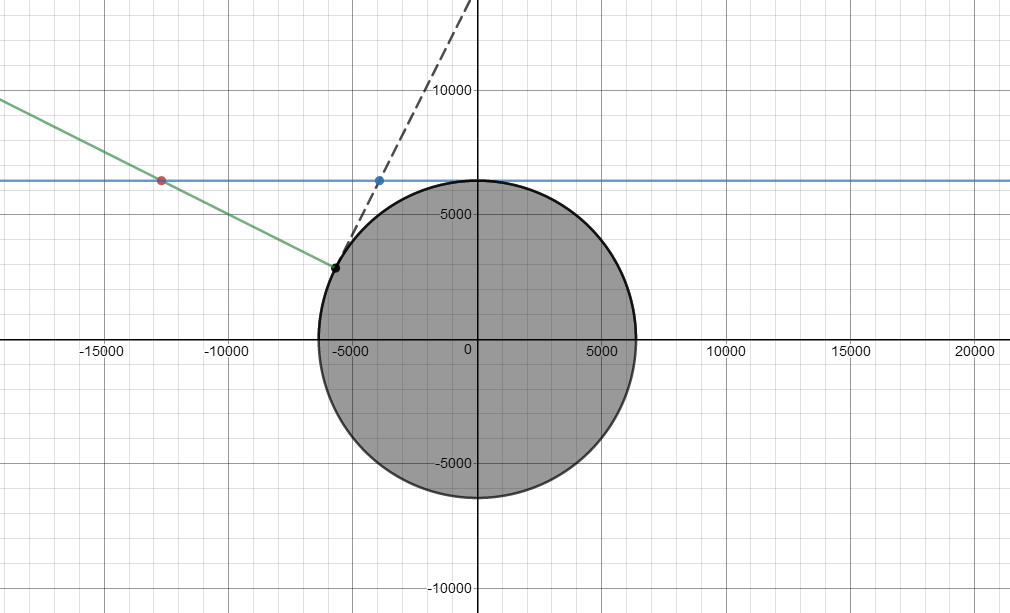 (Check out complete end of post for explanation of picture) What does it mean for you in practice? In one hour you will be going almost 100 m/s. After 6 hours you will certainly be dead because the acceleration will kill you. At this point Earth would still be bigger on the sky though you would already be 500,000 kilometers away. After another three minutes from what I have considered last time you would be almost 3 million kilometers away and Sun and Earth would be the same size, at this point you would also ride in 1/3 of speed of light. But this journey still continues. After another 13 seconds you would go faster than the speed of light with acceleration of 14 km/s. There is not much time left but lets see.. 10 million kilometers would be reached by next 9 seconds. 5 seconds later you would go in freakin 10 million kilometers per second if it would be possible. One second before the journey would end you would reach 0.5 of AU. Soon after you would divide by zero which is dangerous[1]. After exactly 21600 seconds which is 1 quarter of day your elevator is perpendicular to this horizon, which sucks.

I bet your girlfriend/boyfriend would not be so happy about this trip though the first few hours would be amazing.

Explanation: black circle is Earth. Green line is elevator that with you turns left, after 21600 it will go 90 degrees. Red dot is the spot where you need to be in order to see sunset. Blue line is the original horizon.

[1]Do not be discouraged by only 0.5 AU. In the next mili and microseconds you would whizz through whole Milky Way and Observable universe as you would reach infinite speed.