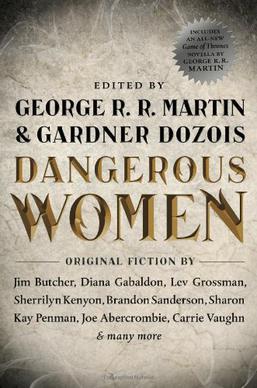 Hi,
when I was on winter vacation I finished another book. This one as you can see higher is called Dangerous women.

This is book that was edited by the two people above. Otherwise it is written by 20 people who contributed with their short stories. While all stories revolve around different time and different people they have one thing in common, they are about how women are dangerous.

The book was great. I can pick about 1 or 2 stories that were kind of weird and I did not really understand them but otherwise, good job.

For example 1st story is about young woman who is trying to escape because there is lot of money promised for her head. 3 men catch up with her in streets of empty village, the poor guys end up horribly.

Other story is about women that has Alzheimer and her son wants to put her in old folks home, that one was quite impressive. One speaks about queen in exile or post-apocalyptic world where most women can not have children due to some virus.

My most favorite one was by George R. R. Martin.. he also wrote Song of Ice and Fire which is my favorite series and this short story was about Dance with Dragons, war that happened way before SoIaF did (130 years or so). The one that I will share with you is different one though, it is called Shadows for Silence in Forest of Hell (translated by me).

It tells story of a widow that takes care of her children and owns inn that is very important place for anybody moving around that area. She lives in Forest of Hell which is a place that is full of shadows, everybody seems to become shadow when they die. These shadows are scary but harmless if you do not break one of three rules:

If you provoke them you will probably die. Once they touch you, your flesh dries and dies. Only thing that works against them is silver and silver has HUGE value. If it is not late you can even cure the wounds using silver dust.

This inn is of course protected by silver because the shadows are everywhere. At the same time Silence (the widow) does not have much money and she is in debt to one guy from outside of this creepy place. To feed her children and keep guests save she catches thiefs and criminals and then through the person that she is in debt with she brings them to justice earning part of the money for their head.

Once such a group of well-known criminals comes into her inn. She lets them eat there but mixes potion that will make them weaker into their meal. (The Forest is a good place for such people to live in since there are not many authorities) In the night she tracks them down and with the help of one of her older daughters she takes them all down without catching attention of any shadow, though it is quite close. When they move the bodies, mostly suffocated people, they clash with a group that steals these bodies which is basically fatal for Silence as she knows that she is basically out of money. With trick she gets them back but one of the enemies scratches softly the neck of her daughter which makes the shadows crazy. In the end the daughter almost dies and she needs amputation of arm and leg.. Silence is also able to get rid of the person that was blackmailing her.

Amazing, I loved the plot.

The only thing that I found a bit annoying was that there were two stories with basically the same setting, the one with Alzheimer and one with old women taking care of their mum who has dementia.. but hey, you can not have all stories bringing completely new stuff!

The picture source: By Uploaded by TAnthony, from Amazon.com. Digital scan of book cover; copyright maintained by publisher or artist, as applicable., Fair use, https://en.wikipedia.org/w/index.php?curid=41143558