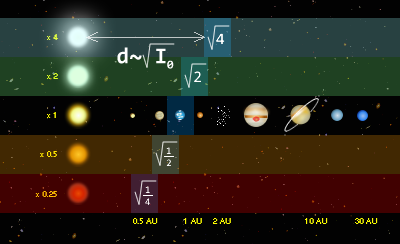 Disclaimer: This is my opinion, not advised by anybody, feel free to comment below.

There are two problems that we as humans will have to face. I will write about the two that I think are crucial and only now people start to appreciate them.

The first problem is Global warming. It poses a lot of threats not only to fragile ecosystems but to whole Earth. Some of the effects listed from Wikipedia are: extreme weather, sea level rise, ocean acidification, changes in agriculture, environmental migration and much, much more [1].

Global warming is the first problem that we need to address but in this post, I will concentrate on the next issue on the list. Humanity will eventually die out if we are not able to spread in the Universe [2].

First, we could of course ask the question when we should colonize other planets or even if it is good idea. Let’s take a scenario, when humanity successfully colonizes Mars and at the same time Earth is becoming more inhabitable. At some point, we simply leave it behind, maybe let it rejuvenate without ever learning how to live in a way that does not cause rest of life extinct. What would continue? Maybe we will be able to spread out in the rest of the Solar System and eventually leave it behind. In what state though? And does it even matter if Mars which is right now mostly empty wasteland suffers any damage if it is even possible? Maybe we would change into species that travels the Universe and leaves dead rocks behind? What if we encountered other life out there, would them await the same fate as Earth? We are authors of our own morality and clearly there does not seem to be objective one. Our values change, we are starting to really appreciate our surroundings, the question is, are we fast enough?

Picture of Mount Sharp on Mars, taken by Curiosity rover.

Note: I am aware that there are different things that could happen. I took time today to write shortly out what I thought about one of them.

[1] There are also problems not related to Global warming but are as well very global, for example what are we going to do with plastic.

[2] See also, gamma ray bursts, solar eruptions (big problem but probably no immediate deaths), huge asteroid collisions and other things that would wipe us out.

Hi,
we all know that helium balloon raises up which makes it such a fun object, most things in every day life do not do that. This attribute can be used to raise objects or even humans quite high, but at one point you get a problem, the atmosphere is less and less dense.

Red Bull Stratos was a project involving helium filled balloon and a capsule with human (Felix Baumgartner). In the year 2012 it raised up to almost 40 kilometers and then the skydiver jumped down. He reached supersonic speeds (faster than sound: 1234 km/h).

In my physics class we talked mostly about the balloon because of what I mentioned in the first paragraph. 40 kilometers is very high and the pressure there is only about 0.497325257421 Pa which is basically vacuum since the atmospheric pressure is 100 000 Pa. (I used the barometric equation)

Because of this, the balloon can not rise so high in thinner air even though the helium is lighter than air. There is so little of it that it does not provide the necessary lift and the balloon has to be huge. In this case it had 9 144 000 cubic meters! Thats a huge thing. The problem of course was that it was not lifting up only one human but the capsule with all equipment weighted 1315 kilograms and the material of the balloon had 1681 kilograms[0].

The whole project was kind of supposed to be for science and finding out how body reacts to high speeds and for further development of pressurized suits[1]. At the same time there was a lot of helium used which was then of course lost. Beware because helium is on the list of endangered elements!

Btw. You can check out my Patreon site here!

[0]The helium also has to be lifting itself.

[1]At about 18 kilometers the pressure is so low that the water in human body starts to evaporate (not all because blood is enclosed but for example saliva). I wrote about that in this other post. To survive you need to be in a suit.

Hi,
today I will write about Cassini-Huygens spacecraft because lately there has been so much hype about its final destination (Saturn’s atmosphere).

Cassini was launched in 1997. Its flight towards Saturn itself was very interesting. The spacecraft did a flyby around

Venus, two times, then did flyby around Earth.. if you have been paying attention in elementary school you might notice that this is a bit weird since Venus is closer to the Sun and one might one to rather fly in exactly opposite direction. Well first of all that would not neccesarily be the reason since the planets are not in a row all the time but the reason why one does not go directly towards the destination is that it takes high velocity to escape Sun. In all those flybys Cassini got few extra kilometers per second so that it was able to get to Saturn without extra fuel.

The probe made a flyby of Jupiter though at that time Galileo was already orbiting him. In 2004 it reached Saturn and succesfully started to orbit him. Throughout whole mission it did a lot of work of course, for example found new moons of Saturn, discovered water on the moon Enceladus, taught us about the nature of rings and much more. What I found most interesting though is the landing of Huygens spacecraft which was a part of Cassini until it landed on Titan. It was first ever landing on surface in outer solar system (only one so far), and brace yourselves.. it took pictures: 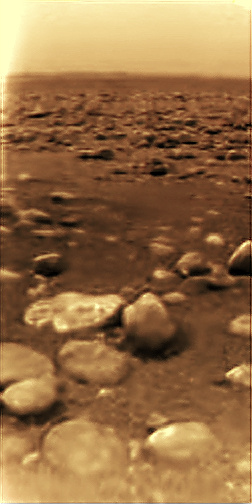 On the left you can actually see the surface. The lander was not functioning very long time, it had battery for 180 minutes and most of the time was spent in atmosphere.

Now Cassini’s mission is comming to an end. This is because it does not have much energy to power its instruments and there is risk that we would lost it completely and then it could fall on Enceladus for example and contaminate it. For that reason Cassini is taking very dangerous dives close to Saturn and its rings to provide some more info and in the end, it will burn up in the atmosphere of the giant planet.

Every single time it is possible that it will be destroyed by some piece of stone. Because of that it uses its antenna as protection but still, it is moving very quickly, so far it dived once, we will see how it goes in the future.