It’s not like science is the trend here though the blog title could be misleading for some people but yeah, today I am not going to write about Science and Rationality. Today’s topic is quite personal and it is about the music that I listen to. I can date exactly when I started to listen to what I listen to now. It happened on 20th of June 2015 when I heard the first song from Insomnium. This one wasn’t of my taste at first and I rather liked this one.

This style of music is called melodic death metal. This is not an old genre and as it goes in metal music, it is just a subgenre, here it originates from death metal. It is also called Gothenburg metal because of the city where some of the oldest bands came from. Those are probably At the Gates, In Flames and Dark Tranquility, I do not know much about the first two especially about the first one but DT is one of my most favourite bands and particularly their newest album Atoma. Just a few days back I made a collage from the album covers, so instead of linking more of the music you can just look at this: 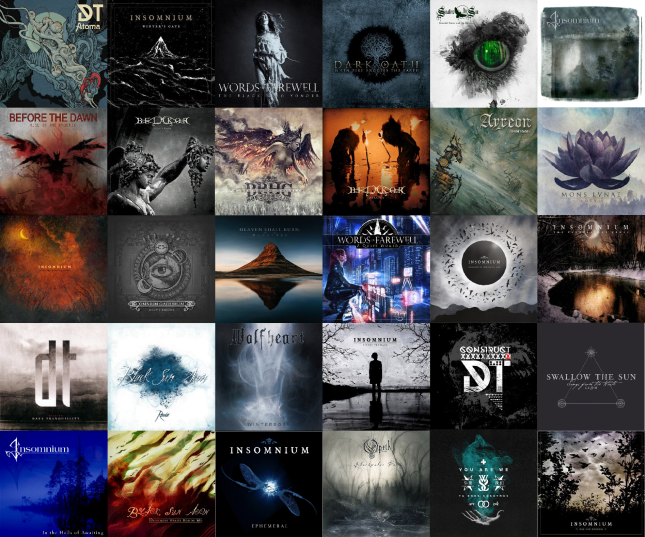 All this music is metal and most of it is melodic death metal.

There are some things that metal fans (also called metalheads) can be quite funny about. First of all, there is just ton of sub-genres. Whether it is progressive metal, death metal, doom metal or let’s say black metal, everybody finds their own and afterwards is extremely sensitive about its exact label. That’s where metalcore and similar come into play. That is a genre (of metal IMHO) that gets a ton of hate from the true elitist metalhead community, if I understand correctly it is because metalcore and co. are connected with the stereotypical idea that emo kids listen to the music and in some way, there is quite a difference between the bands image let’s say, one like Black Veil Brides and Amon Amarth. You can often see people arguing exactly about this on some border band where part of people dislikes it (often just because of the video) and label it metalcore, while the rest tries to defend it to stay metalhead. So yes, genres are really BIG in metal. On the picture above are probably two metalcore bands: Words of Farewell (arguably) and While She Sleeps.

To finish on some sad note as is normal in metal, what I listen to particularly has a couple of important characteristics. First of all, it is melodic as the name suggests. In MDM, there is a lot of effort put into good instrumental parts and many interprets make an instrumental song once per album and those are also listenable for non-metalheads. The second important characteristic is that it can feature growls (those are the vocals that people really hate), clean singing and even female vocals and some bands are female fronted meaning the main vocalist is female (and they often growl too, e.q. Arch Enemy). This is a quite important as when you combine these elements you can get many types of music. The third important part are lyrics, yes you normally do not understand them and yes, they are often about death, misery, sadness and such but they can have all sorts of interesting messages. I will end the post with the lyrics from Insomnium – Where the last wave broke:

How does it feel?
To welcome the new day
Not worth saving
To fall down on own imprudent acts
The wind answers quietly
Clears the black smoke far thick to see
Unfolds the true nature of man

How does it feel?
Bite the hand that feeds you
Poison the well that waters you
Prospects made from castles of sand
Legacy in barren land