Hi,
today I will write about binary and multiple star systems. Those are systems where two or more stars are orbiting each other and sharing THE common center of mass.

Center of mass is exactly what it says. Center of mass of course can apply not only to stars but to humans, to planets and actually anything that has some mass.
On the picture you can see the estimated center of mass after gymnast performs cartwheel. (It is estimated because our body is so complicated that it is not easy to count where exactly it is.)

So this center of mass is a point in space towards which all the stuff is kinda turned.. so if you have a binary star system as is on the gif you can see that the smaller star moved the center of mass little bit towards itself and you can not actually say that the star orbits the larger one but both are orbiting the common center of mass or also the barycenter.

For example Alpha, Beta and Proxima Centauri (circled) are trinary system. Or also Pluto and Charon are binary planet system.

So you can have binary system of two stars but also one of them can be neutron star, or even black hole.

It is very difficult to calculate their barycenter so there is method with which you can simplify whole process a little bit. If there is more than two stars in the system you can

make a hierarchy of all of them.

a) is not simplified at all
b) is clear binary system (nothing to simplify really)
c) is trinary system. Two closer stars were taken and their barycenter was calculated and then as if it was one star it was compared to the other star to create the final center of mass
d) is quadruple system where two barycenters each of two stars were combined
e,f) is now probably clear

In those systems planets can exist but their orbits have to be either small or huge compared to orbits of stars because otherwise they would be thrown out of the system. They can orbit only one or both stars.

One last thing. There are few ways by which we can detect them because usually we are

not able to distinquish star system and they look like one star to us.
First method is by eclipsing of one star behind the other. When one star crosses behind the other we can see the short dimness, this is similar to the method of finding exoplanets.

Astrometric binaries are binaries where one star seems to orbit around empty space which is usually neutron star, black hole or something 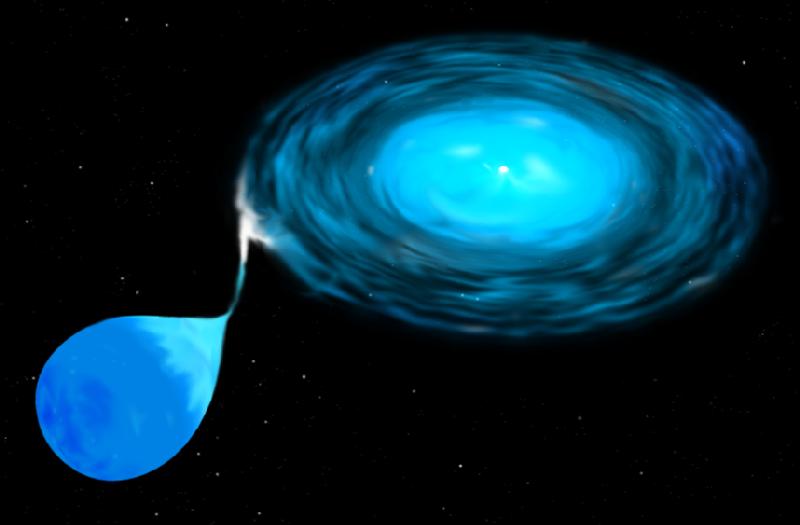 which is not very bright.

Then sometimes when those stars are really close to each other one can transfer mass to the other one which can create accretion disk which we can observe.

Here are some other examples of binary star systems:

All of the pictures were taken from wikipedia pages Binary star, Star system, Center of mass and Alpha Centauri page as for information it was also taken from various wiki pages and also NASA (binary stars.)

Hi guys!
We are nearly finishing posts for fundamental forces. First I would like to apologize that I forgot to mention that force carrier for Electromagnetism is photon.

So weak interaction is pretty weak but still insanely stronger than gravitation. It works with quarks and their flavors and it is responsible for decay.

Here on left is picture of all six possible flavors of quarks. (There can also be antiflavors). Most of matter in universe is made up by up and down quarks. For example neutrons and protons.
Force carrier for weak interaction is w+ boson w- boson or z0 boson.

I was talking about decay so I will show you how beta decay is made by weak interaction.

There is proton with two up quarks and one down quark. It wants to change to neutron because that particle in which this proton is is not stable.

When proton touches neutrino which is carrying w+ boson, boson will move to proton and change one up quark to down quark which makes up neutron. Neutrino will lose positive charge of boson which means it will turn to electron which makes up beta decay!

For summary I would say that weak interaction is responsible for changing of quarks flavor which is many atributes of quarks.