Hi,
here it comes, here it goes. I realized that if I want to really know something about astronomy I have to use physics. For now my first goal is to learn something about optics and particularly about binoculars and how they work and what is the math involved! Today I will write about very basics and it is reflection of light. Probably I will add something to it on my YouTube channel with some examples and I bet it will be fun!

When we are talking about optics and stuff around we assume that light or electromagnetic radiation behaves as particle (on the level where I am), the thing is that as rest of the really small particles like quarks and electrons and neutrinos, light behaves both as particle and wave which called wave-particle duality. This is very interesting but let it be for now. 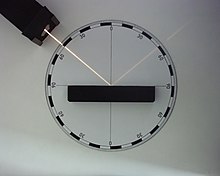 As you see on the first picture from wikipedia article reflection, there is laser pointed on mirror which as you can see is reflected to the right.
This is important, the light gets reflected from mirror because photons bounce in

the same angle from which the came.
On the right you can see the ray of light starting at P, reflecting from O and flying to Q. Both of the angles are are same from imaginative line that has 90° angle with the mirror. θr=θi  … r stands for reflected and i stands for incident. This also means that the angle of the ray and the mirror equals to the one on the other side. This is for mirror but of course other things are reflecting light too but because their surface is not smooth photons are flying all around and you want get the exact image of the thing that was emitting/reflecting the light first even if it is not absorbing any spectrum like snow. This is also the reason why it is dangerous to not wear anything across your eyes when you are a long time on place where is snow because over time all of this light can blind you.

This can happen in matter of couple of seconds if you look directly into Sun since the inside of the eye can be sun-burned in similar way like your skin and the damage may be permanent so watch out!