Hi,
since I have done first two planets of Solar System I would go to the Earth but I find it not so 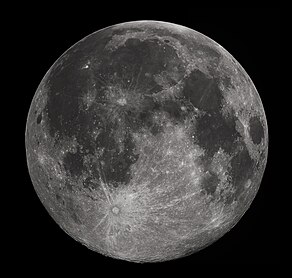 important for me 😀 so I will do the Earth´s partner, the Moon.

First of all. It is assumed that the Moon was created by extremely huge impact of some planet about the size of Mars which collided with Earth. From this collision Moon was born having both material from Earth and from second planet (Theia is it´s unofficial name).
This event made Earth very very hot so when Moon was cooling its closer side to us was
cooling more slowly and when material evaporated it felt on the dark side. This made Moon much thinner on the side turned to us. (Moon is locked by tidal force)

Over eons and eons stuff fell on our brother. When something collided on the thinner side it was much more common to break through thin layer of the surface so lava could bubble up. When this happened couple of times places called mares (marines) were created, this could not happen on the other side because of its thick crust.

There are lot of different structures on the surface. Dark one are marines, there are also craters and lines from old lava flow or even small canyons and places where it is thought that can be milliards of liters of water in the form of ice. Moon is not geologically active but there is still some liquid lava inside, even after 4.5 mld years.

PS: I saw the blood moon and it was amazing!