Hi,
here it goes, here it comes the last post for the series: Planets of our Solar System, maybe if you discover new one I will mention it.
Ok so today I am going to write about Neptune, the eight planet of Solar System, you will see how much we now about thing which is so far away, lets go!

As I said, Neptune is eight planet and the last once since Pluto is no 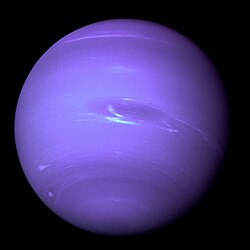 longer considered to be planet (I will make sure to write epitaph about him).

It was discovered not by accident but by math. When Uranus was discovered and its motion across sky was calculated astronomers saw that it is not on the place where it should be. This was because of Neptune which is influencing Uranus. This happened in the year of 1846 and was discovered by Johann Gall and astronomy student Louis d`Arrest.
Neptune was named after Neptune, the roman god of sea. Greek equivalent is Poseidon of course.

Neptune orbits at the distance of 4.5 billions kilometers. Its radius is 25,000 km and he is little smaller than Uranus but much denser.
He gets 1\800 of the Suns energy as we do and as other gas giants in our Solar System he is radiating more energy than recieving, 2.7 times more.
Interior of Neptune is similar to Uranus`s.

The core makes up two thirds of the planets radius and is made up of rock, ice and some iron and nickel silicates.

Mantle is similar to Uranus`s and there are also probably small diamonds created from methane molecules.

Atmosphere is made up of hydrogen and helium but because Neptune is ice giant there is only  80% of hydrogen and 19% of helium. There is also methane which creates the same effect as on Uranus, it absorbs red light which makes the planet blue. Atmosphere also makes 5 to 10 % of planets weight.
The atmosphere is much more violent than Uranus`s. There are frequent 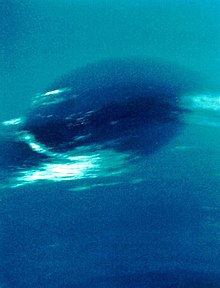 storms and as far as I know they (not counting solar winds :D) are fastest in Solar System.. 2000 kmh. When Voyager 2 flyed around Neptune it saw a giantic storm in its atmosphere. It was similar to Red Giant Spot which is on Jupiter. It was called Dark Giant Spot and it soon dissapeared but some other stormy features appear often (You can see it on the picture).
On the surface is temperature higher than on Uran, about -213°C.

Neptune has magnetosphere and it is as strange as the one on Uranus. It is moved by about half of planet`s radius which astronomers think can be feature of all ice giants. Neptune also has aurora.

There are 5 known rings of Neptune and 14 moons about which I will talk  in future episodes of Moons of our Solar System, so stay tuned.