Hi,
in the last post about Polaris I mentioned precession as the effect that causes change of North and South stars. I did not really explain what is happening there so I decided to make a short post only on that topic.

There are two other good examples of objects that precess alongside Earth. Take gyroscope for example:

On the left you can see gyroscope. It consists of spinning wheel (orange/yellow) and a pin on which it stands. When you speed the gyroscope up it will be able to stand as you can see on the animation. This is basically what Earth looks like and what it does in matter of 26,000 years.

There is a thing called torque in physics. If you hold a pole on one side and something is hanging on the other side it will be very hard to lift it up. You will have to use both of your hands and one will push down and the other up to counter the torque that the objects has, that is a force causing it to rotate around one of your hands.

When you speed the object up the angular momentum will stay conserved so you do not need to provide the torque anymore, in other words it is going to be easy to lift the thing up. If you try to change the angle in which it spins it will feel weird and it wont like it.

Even than gravity is still pushing down. If you add the vectors of the forces together, you will find out that the object will rotate –> precess. The slower it is the bigger the angle in which it precesses. If the force would be applied only on one spot all the time then it would not precess. Take a round sheet of cardboard and rotate it on tip of pencil. If you blow on the spot close to you the thing will tilt left from your point of view. Gravity though will try to tip the thing over always on the side that is lower and thus it will continously change and rotate – precess. If Earth had no tilt there would be no precession.

Hi,
today I will write about precession and what effect it has on our sky.

Polaris is the North Star or Pole Star. This means that it is close to the celestial pole. Celestial pole is a point created by expanding the Earth’s axis of rotation and piercing through the celestial sphere which is imaginary “area” where stars sit. (For Earth based observations you do not really need to take into account that the stars are in completely different distances from us) 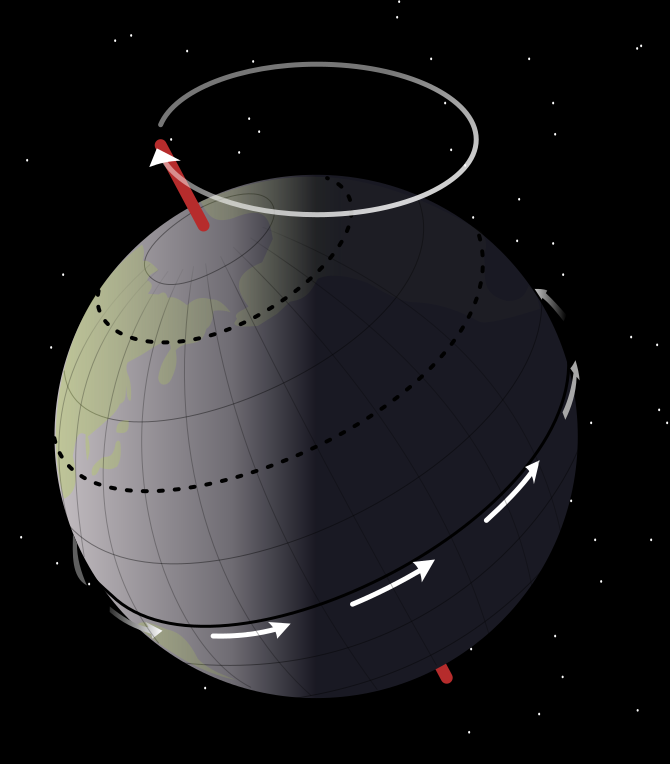 Precession is shown by the circle on the top.

But Polaris was not always the North star. For example when the Great Pyramid of Giza was build aobut 4600 years ago, there were two shafts from the tomb added. One points towards some random stop in the sky and the other one to Polaris.. oh wait but 2600 BC it pointed to Orion’s Belt and the star Thuban in the constallation of Draco. Orion was in Egyptian mythology connected to the god of dead Osiris and Thuban used to be the star closest to celestial pole. WHY?

Because of precession. That is an effect on Earth by Moon and Sun. The same way as gyroscope creates a kind of cone shape with it top, Earth also rotates like this but very slowly, it takes about 26000 years to rotate once. This type of precession is also called axial precession.

On the southern hemisphere the South Star is Sigma Octantis. It has very high magnitude so it is barely visible and not very good for naked eye observation. This will of course also change in the next hundreds of years.

Because of precession astronomers have to update every 50 years the positions of stars and objects, right now we are in what is called J2000 epoch and the next one will be J2050.