Hi,
I saw already lot of people to do book review, like Joseph from Rationalising the Universe or Abyssbrain from Mathemagical site. I have already used a lot of parts from this book in posts about dark matter, dark energy, particle accelerators and so on.

It is book: The Particle at the End of the Universe by Sean Carroll. It is about particle physics and the Higgs boson.

This book has 13 chapters and three extra three parts explaining some stuff around. 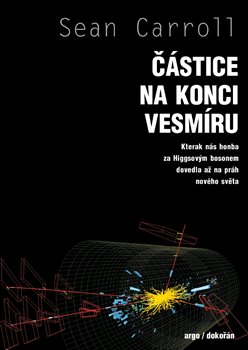 Author starts the book with short introduction to history of particle physics, what people thought that was making up everything. He mentions elements, atoms and so on, then he introduces higgs boson and his role in standard model of physics. He explains why he thinks that it is important to study it and what part LHC plays in this.

In second chapter Sean explains why Higgs is also called “god particle” and the relationship of physicists with god. There is also review of properties of Higgs and some things about fields.

In third chapter author introduces whole standard model and how higgs boson changes it. There are parts about all particles and all four interactions.

Fourth chapter is about the story of accelerators and how they work. This continues to next chapter where there is description of all the work that had to be done to build LHC with credit to all people. Author describes how are particles detected and how they decay.

Whole chapter is just about fields and gravitational waves continuing about symmetries and how they are broken. This is also probably the most complex part of the book which I had to read more times to really get to know what is it all about.

He continues with deep look into finding of Higgs boson with stories about all the people around, and the excitement about it.

There are stories about destroying the world with LHC creating black holes and author perfectly talks about the way news are used in magazines and how physicists were trying their best to not let spread a wrong news about Higgs.

In 11th chapter Sean is talking about Nobel awards for particle physics that led towards Higgs.

The book ends with text about the new things that are now opened for scientists to discover when they know that the particle really exists.

This book is really well written and I give it 10/10. I really recommend it to anybody who wants some introduction to particle physics because with all those analogies you will never be lost. I like how Sean also describes all those people around the great work and how all of this makes the whole picture and story behind “The Particle at the End of the Universe.”