Hi,
even that the event already ended, I will write the rest of what was going on there on mountains.

This day was wednesday and we had a free time. Probably it was planned that we would go cross-country skiing or so but there was no snow, actually across whole day the temperatures were above zero with Sun shining heavily.

At about ten o’clock we went for a planned trip to nearby village. Some people went on downhill course but I did not have skis for it so I did not attend, plus it would be far too dangerous for me on the thin frozen sheet of snow that was left there.

The trip was quite good, not very long. We were back in few hours (15 kilometers). In forest there was still snow, about ten centimeters. At one point this was not very good since we went across wooden bridge with huge holes which were not visible with the snow on top of them.

Some time after midday we arrived to the village and went for lunch to local restaurant. I forgot money at home so I had to borrow some from friend of mine to buy cup of tea at least (Thanks btw., though I need to return the money).

When we arrived back my other two friends were not there yet, since they went for this downhill course. Not many people were there so at least two of us from our “team” could solve some problems which we needed to do until next day evening or so.

One of the problems was the prove of Viviani theorem.

If I remember correctly it goes something like this: wherever you choose point in triangle and take the shortest distance to each side (u,t,s) you will always get the same distance when you add it up, this distance also equals the height of the triangle which has all sides the same length.

While there is simple proof on wikipedia with which I did not come up, I think that mine could be at least partially right too, but it is kind of strange, here you go:

When you choose such a point you can choose the shortest of those three lines. Do the same thing with second point which this time lies on one of the sides. 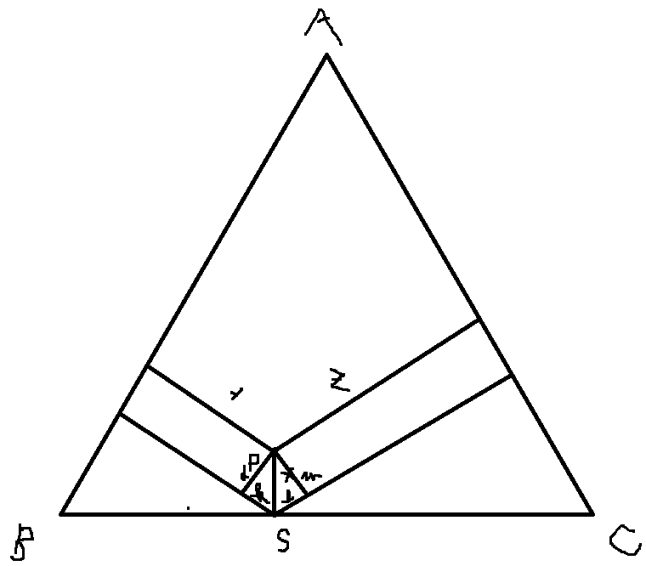 On the picture above you can see point P. From it three lines: x,y,z. X is shortest so I will put another two from the point S where X touched the line.

Clearly if those lines add up the same distance again and I have taken X out completely then:

This can be proven very simply since the angles are either 30° or 60° degrees, you use sinus and cosinus to do it.

Now you know this and you can choose the shorter line again. This time it is the one under Y.

As you can see above you will just continue, one side is going shorter and shorter while the second one is longer. While I have not learned about infinities too much, my guess is that at one “point” the longer would equal exactly height of the triangle, which is exactly what we wanted since it is proved right there. I know that the distance did not dissappear anywhere because of the equation above and I could do this with any point.

Now I think that I am right but seriously, this is the first time I was doing such a problem so lets see what you guys think.