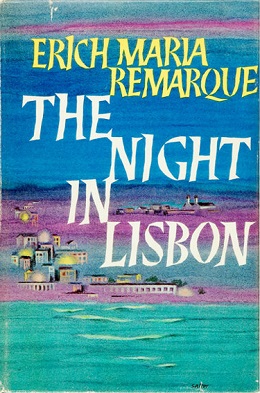 Cover of the 1st English edition.

Hi,
as promised, today I will write about one of the books I have just finished. It is The Night in Lisbon which is classic written by Erich Maria Remarque.

Book: The Night in Lisbon

The narrator is a German refugee who is waiting in Lisbon with his wife Ruth. They want to go to USA because WWII started and they would be persecutated by the Nazi regime. When he wanders through the city after he lost the rest of his money in gamble game he meets guy who wants to give him not only money but also visa with only one condition: that he listens to his story for one night.

It was great book to say at least. I really liked when both characters emerged from the story and interacted with people in Lisbon. Both had quite similar and unique way of looking on the world and it was interesting and very realistic as they discussed it. Most often happiness, hope, despair.. the kind of things you could except from two refugees who were last few years stagnating on the border of death and life.

The story of the guy who has the visa and wants to give it to the narrator starts when he decides to return to Germany, even though he barely escaped. Already here something almost “unnatural” drives him because as he says, he knows that his wife could long be married or dead since it has been 5 years from the moment he escaped. I like how from his point of view it could seem as a great love story (yes it is mostly romantic setting anyway). He deeply loves his wife whom he finally finds but at the same time she deceives him with other man showing that it is clearly not going to end very well. Author does his best in describing the huge difference in the man’s (Josef) and the wife’s (Helen) thinking. Josef is hardened by the years on the run where he knew he could be cought at any moment and Helen, quite naive woman.. at least before her cancer is too strong, just read it. My most favorite part is when Josef, very confidently changes his clothes and acts as electrician just to get to know what is going on with his wife.

Though it was thrilling I give it 9 because I thought that some parts were unnecessary long (in Paris for example) and it seems to me that Remarque could bring more characters into the story.