Hi,
Today I am bringing space news. Just a short ones. So in last post I mentioned gamma-ray bursts. I found out that NASA found one GRB 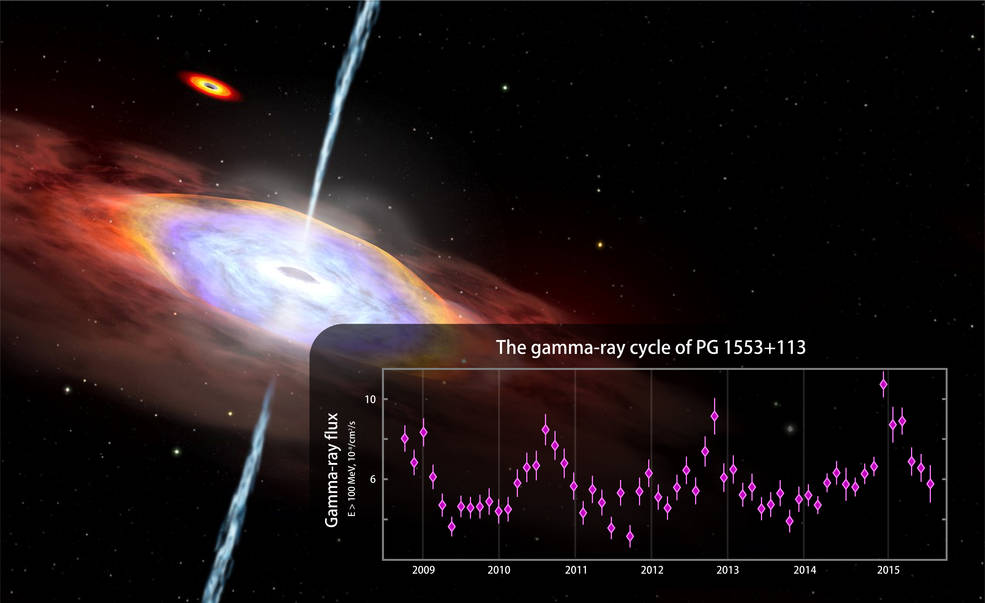 happening over and over again. As you can see on the picture there is real repeating of many and many GRBs.
Those come from black hole, a supermassive black hole from active galaxy 5,000,000,000 light years away.
It has accretion disk but scientists are not sure yet why it is in such a periods so one of many hypothesis is that there is actually second black hole which as its orbits the first one makes changes to the disk which then make some bursts bigger than other.
Dragallur

Hi,
today I want to look on some pretty energetic stuff. This time it will be gamma-ray bursts or GRBs.
I was inspired by episode of Crash Course which you can watch here.

GRBs are the most energetic and violent events which as far as we know can occur in our Universe.
They were discovered by accident. In the late sixties USA was trying to detect if Soviets

are using nuclear tests even after Nuclear Ban Test Treaty. This treaty was signed by Soviets, UK and USA. It banned to test nuclear weapons except underground. Mostly to reduce the amount of radioctive waste released into atmosphere and to slow down nuclear progress during cold war (on the picture president Kennedy signs the treaty).

So USA was checking if there is any radiation from the atmosphere from Soviets. Indeed there was some radiation but too strange to be from nuclear bomb. It was just a short very strong glimpse of gamma burst.
Soon it was clear that it comes from space but noone was sure what is its source. All of those bursts were far too short so before any telescope turned to the source they disapeared.
Until 1991 when Compton Gamma Ray Observatory was launched practically no progress was made. CGRO was fast enough to rotate when some GRB occured and then it sent coordinates to telescopes on Earth which found out that the sources of GRBs are billions of light years away! This was such a breakthrough because those events was found out

that have to be extremely powerful.
But nothing so powerful exists so what they came up with was that when supernova (or hypernova) explodes the energy is lensed in two beams opposite to each other.
This is one type of GRB, the more studied. As you can see on the picture GRBs are only visible if they are pointed toward you which is much smaller fraction of those which actually occur.
The other type is long GRB, those make up of 30% of all GRBs and they are created by merging of two massive objects like two neutron stars or neutron star and black hole.

GRBs are really dangerous. The energy they emit is so high (for example the energy GRB can equal to energy of Sun, released in seconds) that if one of them in Milky Way would be pointed right towards us it would definitely cause mass extinction, like really large one.
Luckily the probability of such event is so low that we will most likely be killed by something else.