Hi,
today I want to investigate one particular perpetuum mobile machine. First when I wanted to write this post I wanted to let it open ended since I did not know the solution for why it does not work but I have found it so here you go:

Physics is basically based on the fact that energy and mass are conserved. If you were able to put enough strong evidence against it, modern physics would basically collapse, this is the foundation.

Performance is larger than power and effciency is larger than 100%. This is not possible though you can check your basic physics skills by debunking these machines. 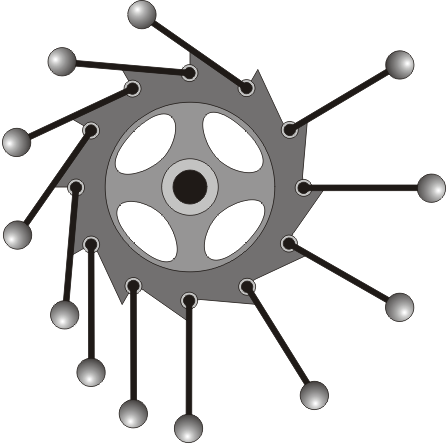 One of the most common “perpetuum mobiles“. As it turns it is supposed to create torgue and rotate forever.

It has been while since I saw what is called “Brownian ratchet” and I was simply stucked. It is kind of different from other “perpetuum mobiles” since it uses what is called brownian motion to work. 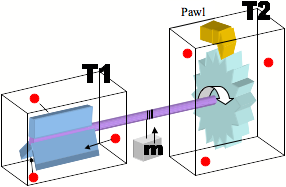 Feynmann was one of the guys who popularised this machine and also showed it flaw.

In the box 1 you have small paddle wheel. Particles bump into it because of brownian motion, that is a motion of small particles that goes indifinetely (this is type of thermal fluctuation).

This paddle wheel can only turn in one direction because in the other box you have ratchet as you can see above. The paddle wheel turns one way lifting up something or simply doing work. Where is the problem?

I remember asking my teacher about this. She said that it would really be perpetuum mobile. I knew she is not a good one. Now I did not know but I was sure that there is some flaw in this and I found that there is but I did not find explanation.

Today I found wiki page about this “Brownian ratchet” and they basically say that if the pawl is the same temperature as the paddle it will also undergo the same brownian motion sometimes jumping up and down. The thing is that we can not forget that the thing is also extremely small. If it would be different temperature it would work but based on thermal difference which over time disappears. Hi guys,
today I will return to electromagnetism as second fundamental force.
It is made up two forces which we are thinking like extremely different ones.

First I will talk about electro static force.
Well, It is quite easy. When you have two objects and one wants to give electron while the other would like to take some electrons and you will make them touch each other electrons will be jumping there creating one object negatively charged and second one positively charged. (F.g. when you pull your christmas sweather on you, in dark you can probably see little lightings and feel those small shocks.) It is the same wiith battery, one side wants to have electrons so when it is charged it does not have them while second one has lot of electrons but it doesn´t need them so through some wire this difference will be slowly going to equalize by flow of electrons.

Magnetism also works with electrons and that is why these forces could be connected to electromagnetism. Magnet is made up by some special material in which atoms are turning by their pluses and minuses. So in every magnet there are millions of magnets. It does not matter if you make it smaller there will always appear new south and north pole which is made by this turning of atoms.
+  -+  –
+  –
+  –
+  –
Here on right would be south pole (+) and on left would be north pole. It it would be really light (not heavy) and it could easily turn it would be kind of compass.

At last if teacher told you that others things that are not created by Fe,Co,Ni cannot interact with this force they are wrong because you can actually find videos of levitating strawberries because of extremely strong electromagnetic field.
There is also very special attribute of electromagnetism, if you have wire without elctricity and magnet somehow rotating around you can create electricity.
That is way to create elctricity for your house. For example water flowing rotating turbine and magnets around wire is way to get energy. Or by wind rotating turbine or hot H2O flowing in reactor.