Hi,
in last post I was talking about the experiment that proved that light is wave, it is creating interference in the double slit experiment instead of two lines which one would assume if it was behaving as a particle. (You can imagine bullets instead of particles).

If light was behaving as particle

So I found out that the particle part of light is bit more complicated so I wont try to explain it so much in the PRO sense but rather in few words, if you are more interested check out this page: 1)

With this theory that light is just a wave there were finally find some problems.

As the light is getting dimmer, with very good camera you can see that some pixels get much more energy than other.

Soon it was found out that when you measure brightness you can find bumps that should not be there if light would be wave, rather it should be quite uniform.

Finally what was concluded from this is that light behaves both as wave and particle, the attribute is called particle-wave duality.

What was also found at this time (something like beginning of 20th century) is that light comes in quantas. This has very interesting effect. If you would walk away from candle and would be able to distinquish individual photons at one point the candle would not shine less and less because at one point there will be only one quantum coming to you and quantum is not divisible so it would start to disappear more and more often but it would always shine. More detail here:

It was also found that not only photon but also other subatomical particles behave like waves and particles. In 20th century it was tested with electrons and sure! They also made this interference pattern on detector.

Hi,
this was a question that friend of mine asked me on one contest I was this weekend. I was sure with the answer but after I said it I was not able to come up with the reason for it, at least I was not sure enough to say something clear.

So what exactly needs to happen for you to see it? There must be a photon which is reflected off the surface. How does this look like anyway on the atomic level? Well the light hits some electron in its way. There is lot of free space so this is why things that are not transparent can be if they are thin enough. The electron absorbs the photon, jumps to higher level (excitation), then it emits photon. Now on what you see depends upon its wavelength. So different materials will like to absorb different wavelengths making the object to have color. You can only change in what orbital you will have the electron so I guess that this is the fundamental difference between various colors of objects (though I did not check it).

So when electron emits the photon you simply do not know what the electron looked like. The only thing that you can get is just photon of some wavelength and there simply is not any way to look on some kind of surface of electron. Another factor is that the light has too big wavelength and you can not observe surface with that because the photon kind of just flows around and when you get to wavelength of the size of atom or smaller, the energy of the photon is so huge that the electron is anyway blown away.

There is nucleus too of course and normally photons do not get there because of this electron cloud around and nucleus is tiny. Otherwise from what I found it seems that again the proton and nucleus as whole is way too small and you can not actually map the surface.

But I was talking only about electrons and nucleus. You can actually see atom as whole. Not by microscope because visible light is way to huge. There is what is called Abbé difraction limit so you have to look for atoms in different way, using for example electrons (electron microscopes[1]) and then recreate the image using some cool physics, this is for example picture of silicon carbide: 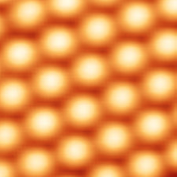 And the one below is picture made by IBM of individual atoms that are shaped like the letters of IBM.

[1]Electron microscopes observe how electrons bounce of the surface just like photons.

The shape of Radium-224 nucleus

Hi,
before I start to write about gravitational waves, let me explain how electromagnetic waves work.

Electromagnetic waves are just light which we see from candle for example. The thing is that in such a candle atoms oscillate and in the process of burning electrons are jumping on more energetic levels, orbitals. When this happens they want to go back right away, so they emit photon and fall back on the lower orbital.

Such a photon then travels towards you and you can sense it with your eye.

But all of those atoms oscillate because there is huge temperature in the candle (800°C). They move back and forth creating waves of photons because some photons are closer together as the atom moves to the maximum of oscillation. As it goes back the photons are more stretched apart creating the gap in the wave. This is called electromagnetic wave.

If you had really good eye and somebody would walk away from you with candle, the light would not stop but you would observe the light come towards you in wave, in quantum. The frequency would get smaller and smaller but it would never disappear and would always appear with the same luminosity.

Now when you have gravity this can happen too in what is called gravitational wave. Such a wave is a result of shaking with something that interacts with gravity. The problem here is that gravity is such a weak force that you just can not observe it on candle and you need some kind of star.

Here comes two neutron stars which were found to be rotating rapidly around each other. As they rotate they create the ripples in space time, gravitational waves. In 1993 the Nobel prize was awarded to two guys who were able to indirectly observe how this system of two neutron stars was losing energy emitting those waves, they were observed to be slowly getting closer and closer to each other.

Physicists are trying to observe gravitational waves directly with tremendously precise methods using lasers but it was not yet achieved.

Picture is from here.

Hi,
today I will write just a fun post about why we can not travel faster than light (even then it is desirable… as is written on mathbloggers cool blog: https://mathblogger101.wordpress.com/ ).

So there are some things that will start to happen when you go really fast.
First of all I would like to say that speed cannot be added because it would couse some trouble (like putting headlight of your car ON while driving).
There is simple equation which you can find on internet which says how speeds works when you are “adding” them.
Well another thing is that stuff is gaining mass while it goes faster but there is some effect only in higher speeds. (Athlete girls should not check their weight while running, they could be disappointed.)
It is exponential so you would need to give infinite amount of energy to system to get that speed, which would release infinite amount of heat and that would destroy everything, you just can not take that much of coal.
There is also another problem about which you maybe did not know.
Because this is electromagnetism whem moving around. If you read that post about EM you know that electromagnetic force carrier is photon.
What is the speed of photon? 300 000km/s
That means that photon which is responsible for your moving can not move you faster than it is traveling!
I will not be able to run faster with bricks for building if my maximal speed is 2m/s.

VSauce1 made a awesome point of what would happen with car traveling at speed of light and pushing its headlights on. If you know what is Doppler effect you can come up with the answer really quickly.. It is that WWWWŽŽŽŽŽMMMM of train or car traveling towards and than away from you but with sound. Same thing would happen to car at speed of light. For passenger inside nothing would happen, time would not happen because nothing like lenght which can travel light in one second would not happen for him because from his view light would not move any distance in one second…

Dragallur
PS: if you know about any reason why speed of light is 300 000km/s let me know because I dont