Hi,
thanks to one of my frequent readers I will add short post to tidal forces because I forgot very important thing: Roche limit.

Roche limit is distance from object (star, planet). If satellite (moon) crosses this distance it will be eventually ripped apart (by tidal forces). Important is that for every satellite it is different because every satellite, like man-made has different properties. It is very complicated to know exact Roche limit for anything because there is lot of stuff you must count in.

On first picture there is planet orbiting sun in save distance and no great tidal forces are disturbing it.

On second planet is coming closer to Roche limit and its shape is disturbed because red side is much closer.

When planet crosses limit is starts to be ripped apart. Stuff nearer (red) starts to fly faster and that is end to our planet. 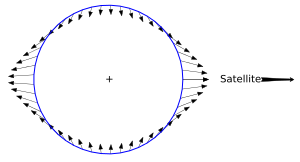 Hello,
before I continue with Apollo missions I will write something short about Space, this time what will happen to it.

There are three main hypothesis and in this post I will write about The Big Rip (TBR).

Firstly I heard about it in the TV but it was not explained very well so I had to search on internet… i greatly recommend video by Kurzgesagt (its in english) and it summarizes perfectly what next posts will be about.

So TBR is theory about end of Universe  For the first time it was published in 2003.

It bases on the expansion of Universe which would increase over time so that observable Universe would shrink into area smaller than anything: atoms, quarks or even hypothethical preons so that no interaction would be possible. Everything would be torn apart because it would not be gravitationaly bounded.

This bases on thing called phantom energy (kind of dark energy) which would have “w” smaller than -1 (ratio between dark energy pressure and energy density).

In aprox. 22 billions years there would be nothing like Universe.

Hi,
Before I start to talk about Apollo 7 I will try to explain why I skiped 2,3,4,5,6.
The reason is that before Apollo 1 there were not piloted missions: AS-201, AS-202 and AS-203 and they were renamed to Apollo 1A (wifes of dead astronauts did not wish to Apollo 1 name be used again), Apollo 2, Apollo 3 so next not piloted mission was called Apollo 4.

So just briefly: Apollo 4 was mission for test of heat shield.
Apollo 5 test of lunar modul on the orbit of Earth.
Apollo 6 second test of rocket Saturn V, there was problem in starting of third level of rocket so it had to land which was done without any problems.

Apollo 7 mission started 11th October 1968 and it was long about 11 days. It was first piloted mission which was completed in the program Apollo and also first which was seen in the TV.
Again there were three men: Walter Marty Schirra who was captain and this was his third mission, he is only astronaut who was in Mercury, Gemini and Apollo programs.
There was Donn Fulton Eisele and this was his first flight. And Walter Cunnigham (also first flight). 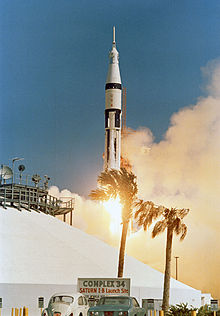 without any major problems. This mission was extremely important after catastrophe almost two years before.

While everything happened well enough there were some arguments between astronauts and between guys on Earth, that concluded into Donn´s and Walter´s ban for another missions.
Also even that all of them had their favorite food they had problems with it because it was too sweet and caloric and also all of them got flu on this mission.

163 turns around Earth were made 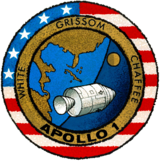 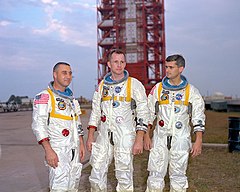